Charlie Kaufman never fails to make movie dates feel just a little odd at the end of the night.

The film was directed by Duke Johnson and produced by Dino Stamatopoulos the creator of stop-motion animated television show Moral Orel. It’s also been nominated three times for this year’s Academy Awards, and it’s not hard to see why.

The film is insightful and heart wrenching, funny and surreal, nihilistic and hopeful. It’s a bit of an anomaly… in terms of stop-motion animation taking to Kickstarter for its funding to ensure Kaufman’s vision was met.

So for a bit of a rundown:

Michael Stone (Thewlis) is an ex-pat Englishman who has become a leading figure on customer service in North America. His book purportedly brings up efficiency in the workplace by 90 per cent, but his success and fortune hasn’t made his life any more fulfilling.

He hates his wife, he hates his child, and he hates pretty much everyone. This boredom with the world around him manifests through an inability to differentiate the faces of individuals.

Everyone in the world has the same face and the same voice, except one person who Stone meets in the film.

While this disorder of Stone’s could be a budget thing (fewer faces to make thus a smaller budget since it was funded through Kickstarter) the effect is pretty startling for the viewer.

Then it starts to get concerning as you realize that everyone is the same.

You realize that this is how Stone sees the world and it must be torturous. It’s not exactly face blindness, he’s still able to see people and recognize them, but he can’t connect with them.

In the film, Stone has gone to Cincinnati for a speaking engagement. On the cab ride into town, he tries his best to avoid talking to the cabbie who tells him about the city’s famous chili and its zoo.

Inside the hotel, Stone finds a lot of the same kind of people. They force conversation, impose upon him, and generally make things a little uncomfortable. In the safety of his hotel room, he decides to call up an old flame who once made him feel something other than his constant regret and boredom.

When he meets up with her at the hotel bar, he soon realizes that she’s the same as everyone else. She doesn’t make him feel anything except for the guilt of leaving her almost ten years ago. She was his one last hope to find someone unique, so when she leaves him for good it pushes him off the edge.

In the next scene, Stone is seen in the shower washing away the memories of his former love. Once he leaves the shower, he starts to spiral out of control. His face contorts and he starts gibbering uncontrollably. He can’t find his medication, panics, dashes through the hotel, and runs into Lisa Hesselman in her hotel room. 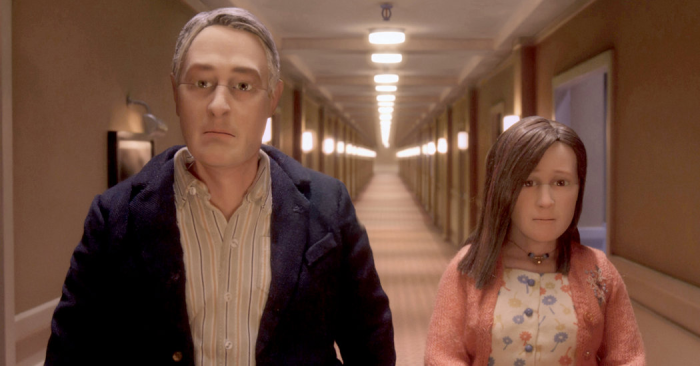 Michael Stone, left, and Lisa Hesselman, right, find solace in one another if only for brief moment.

Personally if someone was babbling at the door of a hotel room I was staying at, I’d probably call security. But Lisa has come all the way to the city in order to attend his talk, so when he asks Lisa and her friend out for a drink she feels so special.

Almost immediately, Lisa shows how much she respects Michael Stone. She can barely speak when he arrives half dressed in her room shouting about looking for his friend.

At the bar, we start to see the immediate differences between Lisa and her friend. Lisa’s quiet, thoughtful, spiritual even, and she seems to want to burst out into song. She’s also voiced by someone other than Noonan, so the differences are even more startling. We start to realize just how much her uniqueness means to Stone.

He says there’s something unique about her. He loves her face and her voice. He eventually invites her to his hotel room where they talk for a while before having sex. In that short time, the two connect somewhat. We learn of Lisa’s abusive former boyfriend, we see a scar covered by her magenta hair, and we learn that she is a musical person.

Although her life could be considered quite mundane, Stone finds some peace in listening to her talk about her day. Yet everything seems to change in the morning.

In the light of day, Stone realizes that Lisa is just like everyone else. Her face and voice slowly revert to the same emotionless mask everyone else seems to have. He’d just talked to her about leaving his wife and child for her, yet something’s changed.

In most of Kaufman’s films there’s typically a single act/event that changes how the protagonist sees the world.

In Synecdoche New York, Philip Seymour Hoffman’s character smacks his head on a sink. This violent act leads him into a spiral that eventually ends in his death. It’s like being smacked by the director’s intent.

The difference in that film is that Hoffman’s character after his hardships learns to see people as individuals. He sees them as the lead actors of their own lives. Almost the exact opposite happens with Stone.

F0r a brief moment when Michael Stone meets Lisa it’s like he’s finally found someone unique, but that changes so suddenly. But let’s think about his mindset for a brief moment.

When he meets Lisa, Stone is pretty much at his lowest point. He’s drunk, he’s trying to cheat on his wife, and his mind seems to be falling apart. In a bit of a fourth wall breaking moment, Stone’s face begins to shudder and shake. His mouth at one point in the film during a dream sequence actually falls off revealing the armature beneath him.

The little line that crosses the faces of the actors is actually a seam where the mouth can be replaced. It’s actually a bit of an ingenious solution to what is otherwise an extremely lengthily process of replacing the lower parts of the face each time to make them speak.

Stone is looking for someone, anyone he can connect with. Who he ends up finding is Lisa who is an impressionable, young, and vulnerable woman willing to listen to anything he says. She seems him as an idol, but he sees her only as a temporary escape.

Immediately in the morning after, he starts to demand she do things the right way. He doesn’t want her to clank her fork on her teeth, to chew with her mouth closed, and to do what he wants, not to be her own person.

For the briefest moment he was able to see past the veneer coating society into the uniqueness of each person he professes is so important to pay attention to in customer service.

Then, she changes or perhaps Stone’s view of her changes.

Much like his namesake, Stone is an unmovable kind of character. Nothing can truly stir him due to his rigid view of the world around him. Who knows maybe the chili really is good, maybe the zoo is actually a lot of fun, and Lisa actually could have loved him unlike anyone else in the world.

Stone will never know these things. He’s a household name and he has an image he needs to maintain. He can’t run away from his life. He’s trapped by it, but he can’t truly be solitary. He needs to be around other people yet he can’t stand them. It’s a quandary and his coping mechanism are his flights of fancy with women.

Lisa lives a very ordinary life. She’d like to meet someone one day, settle down, continue working, have children, have a family, grow older, and then die. She’ll live a normal life out of the spotlight, but she isn’t just a face in the crowd.

At the end of the film, we see that Lisa and her friend really do have faces. They are unique. They have feelings and aspirations, and Lisa even hopes to meet Stone once he’s in a better spot in life.

The film’s trailer paints Stone as someone who is thoughtful, intellectual, and emotionally insightful. In many ways he has these traits. In many other ways, he’s also burdened by the weight of his lofty ego. He wants to find someone who will make him feel special, yet he wants them to conform to his way of doing things and take away the characteristics that make them so unique.

The trailer also makes the film seem somewhat hopeful, but it’s far from the heartwarming film you might think it to be. It’s a film that will make you question how you see others and how you treat them as individuals.

Someone like Lisa has many things that make her special, yet she’ll never be able to live up to what Stone wants. He needs to be constantly engaged, constantly in flux, constantly stimulated by alcohol, sex, or other things. Lisa is just a normal person. She isn’t some kind of god who could provide that all for Stone.

And I guess that’s his major flaw as a character. Stone wants too much, yet he’s not willing to give up anything to be happy. He’s unwilling to compromise, but that’s what makes him unique.