If I’ve learned anything from playing Hidetaka “Swery” Suehiro’s games it’s that food is always a big deal.

FBI Special Agent Francis York Morgan from Deadly Premonition is probably one of the Japanese game director’s most notable characters and his investigative technique involves finding messages in his coffee.

While this may be a send up to David Lynch’s Twin Peaks, “FK in the coffee” has become one of York’s most defining moments as a character. Through the swirling darkness within a porcelain cup he finds the lead that eventually helps him uncover the mastermind behind the deaths in Greenvale.

And in Dark Dreams Don’t Die, also known as D4, private investigator David Young is constantly surrounded by food. Whether it’s his hometown Boston’s famous clam chowder or a pack of jelly beans, David’s always eating something to regain his stamina. However, food in D4 is also more than just a gameplay mechanic.

The one thing he’s always eating, well chewing, is gum.

Years ago David was part of an undercover investigation with the Boston Police Department. They had been investigating a new drug called “B” or Real Blood that has both divine and devilish effects on its users, but the investigation was cut short.

David must have gotten too close to finding the main supplier because Peggy, his wife, became a target. She was shot in their home and died in his arms.

As she lay dying, Peggy whispered into David’s ear “Look for D”.

David was a suspect in the case, but his involvement in her death was dismissed.

Soon after her death, David quit the force. And soon after that he discovered that he had the power to use artifacts, which he calls “Mementos”, to transport himself into the memories of people from the past.

To help him decode what he sees in the past is his former boss at the BPD Forrest Kaysen. Kaysen is a connoisseur of all things Bostonian and also a source of comic relief in the game with his big appetite and even bigger personality. He also has a past that we’ll be talking about in a bit.

As far as we can tell David never had these powers before Peggy’s death, so something about the incident triggered some special power in him. However, it’s only after her death that he starts to chew gum, which is something we’ve seen Peggy do in past and in present.

So what’s the connection between the gum, Peggy’s death, her mysterious “fathers”, and the incident aboard the plane where a drug mule has been kidnapped by a vengeful DEA agent?

Well this is the story of a man with a very strange fate, so it’s not exactly difficult to make a few assumptions here or there.

Let’s start by looking into the past of Real Blood.

Also this might be a good time to get yourself a drink.

In 2002, a Boston university student collapsed on a field during a football game. Upon searching his thing, a red powder was found. This was the first recorded incident of “B”, a new powdery narcotic, being found in the possession of a citizen of the United States.

“B”, named so due to its red colour and resemblance to powdered blood, increases the user’s strength while keeping the physical changes effects to a minimum. However, in 2004 several new strains of “B” were found and some of them more deadly than others.

It is often cited that when under the influence of “B” the user feels as if it is a divine experience as if they’ve become a god. Perhaps the drug gives the person, as Olivia Jones notes in the game, powers more than just a simple high commonly experienced through the use of other narcotics.

From what we’ve seen in the game there is only one character who is currently under the influence of the drug and the changes it makes to him are… monstrous to say the least.

To understand more about Real Blood we need to go even further into the “past” by looking at another video game developed by Swery.

Deadly Premonition, once known as Rainy Woods, was released in 2010. It starred Francis York Morgan, a FBI Special Agent who is called to the small town of Greenvale to investigate the ritualistic murder of a young lady.

Over the course of the game’s development, Deadly Premonition went through a number of changes including a change of the game’s main protagonist, David Young Henning. The game is also called The Red Seeds Profile in Japan, so you can start to see the connections building.

And what’s more is at the center of the murders in the town are red seeds.

These red seeds are then refined and sold as drugs, which we find out from a side mission in Deadly Premonition involving a man named Quint. He tries to hide the true nature of the powder by saying it’s just a protein supplement, which is actually a pretty good cover considering it increases your strength.

However, not everyone is as casual of a user as Quint.

George Woodman is the sheriff of the town and is about as juiced on the red seeds as you can imagine. Near to the end of the game, York confronts George accusing him of the murders of the young women throughout the town. George is backed into a corner and ingests two handfuls of the red seeds making him grow into the monster seen below: 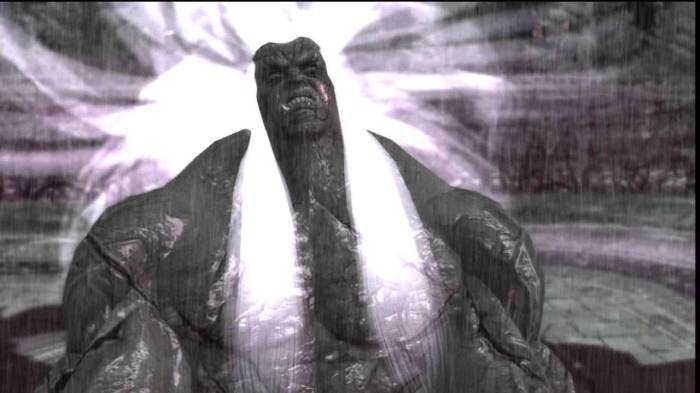 What conditioner do you use?!

“I have these seeds because I am the chosen one!” he tells York. “They came to me and that proves my divinity.”

Because of his past in the little town that spawned the red seeds and the various traumas he experienced, George really feels the effects of the seeds.  It’s enough power to transform him into a monster, but the power of the seeds destroys him.

And in the midst of the investigation, an unassuming Sapling Salesman enters into the town. His name is Forrest Kaysen and it turns out that he’s also an entity from a place called the Red Room. Kaysen goes around the United States murdering young women and implanting saplings into their bodies, which then sprout and produce the red seeds.

Whether or not these two Kaysens are one in the same is a little dubious, but as we saw in Deadly Premonition he was simply a servant of the Red Room. Kaysen didn’t actually exist and this Kaysen could just be another puppet having his strings pulled.

No matter who is supplying the drug to the people in the game, the effects of it are devastating.

The same effects can be seen in D4 through Philip Cheney, a DEA agent who uses Real Blood through a ventilator. It apparently helps him keep his anger in check, but as we see later in the episode we see it’s not exactly working like he hoped.

Real Blood is one hell of a drug.

As we see from George and Cheney, the direct ingestion of the Red Seeds and Real Blood has some pretty devastating effects: it makes you insane and it also gives you magical powers. Cheney is able to use electricity to melt steel doors and control wiring in order to kill people. It’s also assumed that this is a bit of a latent ability for him as he’s able to stun David in the middle of his investigation without using a taser.

And as noted before, there are people who have a divine experience with the drug while there are other people who have horrible experiences with it. The people with the horrible experiences often end up being turned entirely inside out or crushed into a human-sized cube as two case files in the game reveal. It can be horrendous stuff, but what if the dose could be reduced enough to prevent the physical side effects?

Or what if the drug has different effects on different people like how no human sees the same shade of red when looking at a Valentine’s Day card?

Which brings me back to David and the gum.

Maybe the gum is giving David the ability to travel into these memories.

David is able to travel into the past and throughout his time there he’s constantly chewing gum. Whether it’s before he makes his dive using a memento or using gum to plug a gas leak, he always has it and he is always chewing it. The gum also runs out of flavour and, perhaps, out of power making him grab a new piece to make his powers stronger.

Real Blood or Red Seeds ingested over a long time is able to give you special powers, according to George Woodman. In Deadly Premonition, he describes seeing a pack of deer near to the red trees in the town while hunting. As he took aim and shot one with a hunting rifle, the deer continued to stand as if completely unaffected by the slug.

Over the years, the deer must have ingested the red seeds and it had made them, for lack of a better term, immortal. But what if the red seeds changes you on a more fundamental level. What if it empties out your body of its own blood and replaces it with some kind of magical force? Maybe the red seeds fills you with the power from the Red Room and now Real Blood is doing the same now for the general populace.

It would explain why Peggy was found drained of her blood and, perhaps, the red liquid present on her body was just the Real Blood seeping out.

It could be that the exposure to the gum over a long period of time had given her some special powers, but not the immortality it had granted to the deer or the super strength it gives to many other people.

So what did it give her? Perhaps the same power David has now: the ability to exist in 4 Dimensions. In her case, it allows her to act as an apparition watching over David as he goes through the past, or perhaps her appearances throughout the game are just a side effect of the Real Blood in the gum.

Whatever Real Blood or the Red Seeds do, they seem to be able to grant the wishes of the user. Most simply wish for power like George or Cheney, but David wishes to change the past through the use of his investigative abilities.

Perhaps this is why he’s constantly accompanied by a Snowy Owl, which is often a symbol of insight and wisdom, and the mysterious doctor Roland Walken who is an article in and of himself.

If I know Swery’s writing, it’s entirely possible that this theory is completely wrong. He seems to specialize in the swerve within his writing that gives us an impression of what will happen before wildly careening into something entirely different.

I believe David Young is using a diluted version of Real Blood, perhaps unconsciously, through the gum to help bring him into the past so he can change it. It’s the only way to explain the sudden development of his special powers and we know from previous games that the red drug can have some astonishing effects on Swery’s characters.

It would also explain why there’s so much focus on the gum and a focus on the ingesting food as if you can take the power of something into yourself through consuming it.

This was the first I’ve played of Dark Dreams Don’s Die and I’m definitely excited for the next episodes to be released.