A bit of a disclaimer right from the top, I have done no research on Doc Savage.

As much as I’d love to learn about his origins, I’m going into this list a little blind – more or less – because it’s funny. There are some pretty amazing things the Bronzed Doc Savage and some pretty weird things too.

Here’s a short list of about nine things I noticed while reading Doc Savage [#60] The Majii.

In one of Doc Savage’s previous tales, someone tried to poison the water that leads into his New York headquarters. As such, Doc only drink water distilled in his laboratory within the building. What does that entail? Well, probably just boiling the water or putting it through a filter.

Where it gets weird is how they probably never fixed the problem. There’s no way to tell what kind of poison leaked into the building and if its other residents know about it. While, without having done much research, it’s entirely possible they are the building’s only residents it’s still a bit dangerous.

It’s good to know what Doc is taking precautions for his own health, but does he wash his hands using distilled water? Do the toilets use only distilled water? Is Doc Savage so badass that his body just processes waste into proteins for his gigantic muscles leaving him no need to use the washroom? Perhaps.

Doc Savage has a mountain stronghold for captured prisoners

Hey, do you know what the best way to help convicts turn a new leaf? Brain surgery. Yup, Doc Savage – in a secret location – has a mountain stronghold where a select group of neural surgeons perform brain surgery on convicts to make them good.

In The Majii, Doc Savage comes across a goon who had his eyes slashed. Without the ability to see, he’s able to extract a little information out of him and then sends him off into the brain plucking mountains. Using what he calls precise and gentle manipulation, he’s going to turn a bad guy good.

While there are almost too many ethical quandaries to count here, I just find it perplexing how Doc Savage thinks it’s a good idea to snatch up criminals and send them off to do experimental brain surgery. It’s a pulp novel, so of course the treatments will work, but in the real world this would be some messed up stuff to come across in the news.

At one point in The Majii, Doc Savage comes up to a wall in his New York lair. When he stands close to it, a mechanism behind the door interacts with some radioactive isotopes he keeps in his pockets. Now if that’s a recipe for testicular cancer, I don’t know what is. 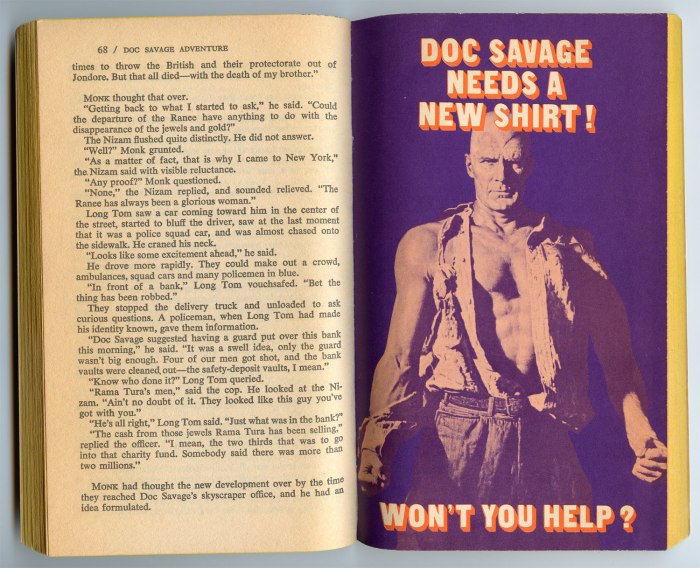 Look at that badass mug there, but that receding hairline…

It’s easy enough to dismiss this small detail in the book as just the author misunderstanding how radioactivity works; however, Doc Savage carries these little discs around with him everywhere. How powerful are they? Is he immune to their effects because he’s a protagonist? Is habeas corpus a walking time bomb of cancer? (I’ll be getting to that soon).

It’s really, really dangerous! And another reason why Doc Savage is a total badass.

Doc Savage has a team of five experts, and a pig

Close to the opening of the book, Doc Savage comes back to his lair and finds two of his Fabulous Five ready to kill each other. Ham is a scrupulously dressed lawyer with a cane that doubles as a sword and Monk is a chemical engineer with a body of an orangutan mixed with a boxing champion. And they’re about to kill each other when Doc Savage walks into his lair.

I love seeing old books having calls to action for readers. Everyone needs a new shirt, especially writers.

While it’s easy enough to say, “Aw, well they were just play fighting.” The way Doc Savage describes the two sparring in the lair was close to them actually murdering one another. When Doc Savage whistles that there’s something up, they both stop, but it doesn’t end there.

During the story, Ham and Monk have to investigate someone named Rama Tura. At an event, they mix into the crowd trying to blend in. Knowing full well that he could ruin the operation, Monk yells out when Ham coyly stamps on his foot. In the description, it says that Monk wouldn’t have even noticed the pain, but he still yells threatening everything. He does nothing to prevent two of his men from killing one another! What the hell, Doc?

Mercy bullets are one of the many enigmas of Doc Savage. According to the book, the bullets use a chemical reaction to stun enemy gunmen into an unconscious state. Fired from the machine pistols each member of the group uses to fight crime, they’re a tool used to put bad guys to sleep.

Could mail this out, but I don’t think there would be much of a response.

The question I have is, how the hell do these work? Rubber bullets are a crowd control tool used by police and riot squads to put people down without killing them. When shot it looks like this and the aftermath looks like this. There are even reports that rubber bullets can kill at a ratio of 1 in 18,000 rounds.

Now, how did Doc Savage invent a bullet that can be fired through a magazine, hit bad guys, and stun them into an unconscious state all at the same time? It seems like a recipe for disaster considering how often gunmen run at the team along rooftops and precarious fire escapes.

You can imagine that being a man of action in the 1930s meant you had to look like one. Much like The Avenger, who was written about previously, Doc Savage really looks the part. Half giant and half hurly burly woman fainter, he’s pretty much the image of a man’s man, but he’s also completely tan.

While through some research, I could probably find out why… it’s funnier to think that he’s just really tan and probably suffering from a severe exposure to the sun. Why this is a problem is because being tanned, or hit by our sun’s radiation for extended periods of time, can lead to skin cancer.

Doc also has completely golden eyes making him pretty much the equivalent to this guy from the Dungeons and Dragons movie made in the mid-90s.

This book was written in the 1930’s. It was a different time, and the book even goes out of its way to help explain that the “Blackies” they use as smokebombs are only named so due to the black fumes they create. Still, there are a whole host of betters names to use and Doc had to pick that.

The Majii is filled with references to the “brown gunmen”, “suspicious brown people”, and noting that the brown villains have coconut-shaped heads, but something about the “Blackies” made me feel a bit… meh. Call them Smoke Pellets, call them Smoke Bombs, call them “Greyes”, or anything other than that.

Doc Savage has a garage filled with random cars

At one point in the book, Doc’s team had been kidnapped by Rama Tura’s men. In order to save them, Doc kits himself up in his best gear and runs to his lair’s garage to pick out a vehicle. Noting that it’s night and that delivery trucks at a common sight at this time of day, he revs it up and drives off.

What they fail to point out is that Doc Savage literally has a garage packed to the brim with cars for all kinds of different jobs. Later in the book, the team uses something akin to Barack Obama’s beast of a limousine to crash a Doc Savage eviscerating party being held in an abandoned warehouse.

Bullet proof glass was invented in 1903, and was used during the First and Second World Wars. However, commercial use and production of the glass was and still is a relatively difficult process. Doc must have some pretty interesting connections to get him a car like that.

The police take orders from Doc Savage. In The Majii, instead of questioning why they should guard a bank vault at his command, the police take it upon themselves to shove a whole platoon into a bank vault. Four police officers are shot and the money still ends up being stolen.

Instead of telling the police what’s going to happen, Doc Savage puts them in harm’s way and brushes it off when four of them die. Four police officers! Entire cities mourn the loss of one and it’s a tragedy when even more of these brave people are lost during encounters with villains.

It doesn’t end there! Doc Savage also gets information from the Better Business Bureau, major airports in the United States and abroad, and from banks like the one where he sent officers to die. Who needs Snowden when Doc Savage can get any information he could possibly need just by asking.

While you can boil down most of these observations as just being heralds of the pocket-book pulp fiction we all know and love, there are still some concerning things about good ‘ol Doc Savage.

How he can invent almost anything and keep it for himself, how he skirts danger with everything he does, and how he puts others in harm’s way and in more than just one way… he seems more like a criminal mastermind than a good guy.

Still, he’s Doc Savage made from the crucible of physical and mental perfection however flawed he may be.

5 thoughts on “Nine things about Doc Savage that are… questionable”