A few weeks ago, Harry Potter author J.K. Rowling said that Ronald Weasley and Hermione Granger’s relationship was more wish fulfillment than anything else.

“…for reasons that have very little to do with literature and far more to do with me clinging to the plot as I first imagined it, Hermione ended up with Ron,” Rowling said during an interview with Emma Watson – who portrayed Hermione in the films based on the book.

“Maybe she and Ron will be alright with a bit of counseling, you know. I wonder what happens at wizard marriage counseling? They’ll probably be fine. He needs to work on his self-esteem issues and she needs to work on being a little less critical,” she said during the interview.

To be honest, Ron Weasley is a jerk in the books. Unlike his stumbling, fumbling, and slightly aloof self in the films (portrayed by Rupert Grint), the Ron in the books is slightly racist, exceptionally temperamental, and extremely jealous of pretty much everything and everyone.

Do you know who hates House Elves? Freaking Ron Weasley, and he ends up marrying a person who started the Society for the Promotion of Elfish Welfare. Maybe Ron would change over time and become a more tolerant person like his father, brothers, and family; but being a pure-blood wizard means he has an inherent intolerance for non-magic folk.

While there are many reasons to love Ron, people who read the books are more likely to agree that the relatively normal Harry Potter might be a better fit with Hermione. Maybe.

This process of putting characters together to pretend kiss is called “Shipping”. The etymology of the term is pretty unclear, but it’s the process where two characters who are unlikely to be romantically tied are put into the throws of romance. The important part of good shipping is that it has to be believable. It can never be something like “Harry Potter and Hungarian Horntail” ship, but you might be surprised what you can find out there in the wide, weird world of fanfiction.

J.K. Rowling stepping into the fandom ring acknowledges possibilities with the series narrative. That’s really what shipping is about, the possibilities.

This kind of shipping is about exploring new thematic territory with characters. For instance, a ship between two male characters can have homoerotic themes, but it can also explore new territory with the series’ social reach outside of a sexual context.

For instance, it is assumed that Albus Dumbledore had a romantic relationship with his closest rival Gellert Grindelwald. While the two had interesting views in their younger years of ruling all da muggles, it’s only through this close relationship do can readers actually explore Albus. Much like Harry Potter, Albus is different.

Rowling never explore this facet of Dumbledore and maybe if she did his sexuality wouldn’t have caused the firestorm that it did years ago. Maybe instead we could have received a bit of insight into the emotional turmoil he went through when confronting Gellert after the death of his sister and his rise to power as a dark wizard. Putting characters into a romantic context does more than just fulfill the wishes of fans, it also allows us to see more about who they are as people.

There is no end of shipping stories about Dumbledore with a whole host of characters. While they’re usually pretty insane situations, Dumbledore’s character makes us want more from him. We want to explore those facets of who he is because his sexuality isn’t simply just a thing it’s a part of him.

How does sexual discrimination work in the wizarding world? Are LGBTQ people accepted into Hogwarts or are they kicked out when they’re found out?

There are no gay characters in the books aside from Dumbledore, and his sexuality is kept hidden from the reader through subtle intonations making being gay something you need to keep secret. Is this the social contract you sign as a witch or wizard? 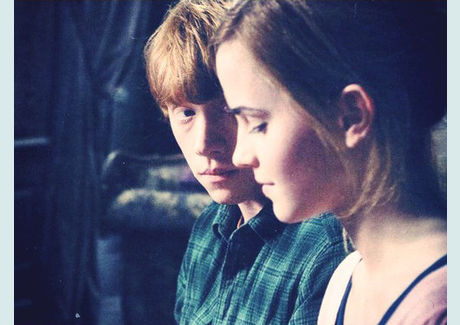 For those who don’t know, muggle-borns (or wizards and witches from non-magic families) are discriminated against in the Harry Potter universe. Treated almost worse than Squibs (wizards who cannot use magic), muggle-borns are looked down upon by almost everyone including pure-blood families like the Malfoy’s and even the Weasley’s.

Could you imagine how annoyed Ron is to be shown up by a muggle-born every single day and in every single class? In the first book, Ron is continually at odds with Hermione. Discriminating against her due to gender, class, and ability, he really isn’t making a great case as secondary protagonist. He’s a jerk.

Throughout the books, Ron angrily storms his way through explicitly showing his hate for House Elves, talking trash about Squibs like Argus Filch, continually undercutting the importance of muggles, and being an all around bad influence on Harry who resists his friend’s discriminatory views.

Over the course of the books, he gets better; however, Hermione could probably do better.

If it is as J.K. Rowling says and that their relationship is more wish fulfillment, who else could Hermione be with? Does Hermione really need to do what society wants them to do? Does she need to get married, have kids, and continue the cycle of students to Hogwarts?

Think about it, when Hermione was 11-years-old she found out she was a witch. She would have gone to school in the muggle world until about grade 4 in school, and then she’s ripped out of her original reality and into a world where magic is real. Could you imagine how overwhelming that would be?

On top of that, the only wizards she’s friends with is a boy who constantly has assassins trying to kill him and a racist wizard who kinds of hates how she’s a muggle-born. She’s confronted by pure-blood wizards who discriminate against her and a race of elves who really don’t want to be elevated from servitude. Compared to the real world, the wizarding world is a backwards, crazy place. Hermione comes from a world where slavery is wrong, she comes from a world where the weak are elevated, and she comes from a place where being different is slowly becoming acceptable even promoted.

Ronald Weasley represents the stubborn centre who are unwilling to change their views on the world. Ron’s only able to do so when confronted by the inherent problems with the pure-blood view. For instance, when Draco Malfoy first calls Hermione a mud-blood, Ron lashes out and accidentally attacks himself with his broken wand. In a way, it symbolically the slugs pouring out of his mouth represent the kind of vile rhetoric he spouts against non-magic people much like Draco.

The relationship between Ron and Hermione is meant to explore these inherent differences in class, gender, and identity between them. Whether they get married in the end is really secondary to all of this. The value is in the conflict.

Shipping characters together in any series is about trying to explore personality conflicts.

While many of the stories written about characters have to do with sex, the good stories explore the other parts that make relationships an important window into understanding the human experience. Putting characters together in Harry Potter is more about exploring the relationship between magic and non-magic people, or upper and lower classes in society.

The importance of this conflict is that most of the discrimination goes unsaid. Draco Malfoy is someone who is totally explicit in his hatred of mud-bloods and squibs, and even he makes some people feel uncomfortable. The danger comes from people like Ronald Weasley who agree with some of the views pure-bloods have and how they can be complicit by saying nothing.

Putting characters like Harry and Snape together, but not in a romantic sense, build their relationship. Snape is still in love with Lily Potter and has to deal with being responsible for her death and the horrible upbringing of her only child. Snape and Harry being forced to interact would reveal more about their characters than one trip into each other’s minds through occlumency.

Shipping, however, can also be extremely damaging to the intent of the author in series. In an episode of Adventure Time called “All the Little People“, Finn finds himself a mass manipulator controlling little figures who represent his friends in real life. It’s an episode certainly worth watching.

Anyway, should J.K. Rowling change Hermione Granger and Ronald Weasley? No, I think it’s all right as is. The value of their relationship, as with all relationships, are the conflicts that arise from their interactions.

The differences in class and cultures; gender and identity help readers learn more about the conflicts they are going to face in their lives.

If anything, them being together represents a more plausible reality than some character who is literally “perfect” for Hermione simply coming along and taking her away in the post-narrative.