Mascots, logos, and sounds form part of a company’s identity and that means having someone or something that’s as recognizable as Mario’s mustache and as effective as the “Bing” heard at the start of most Nintendo commercials in Japan.

In North America, mascots usually take the form of a celebrity endorsement, slogan, or a simple logo, but in Japan these characters are part of the corporate identity of each company.

It’s like actor Tommy Lee Jones being the mascot for Boss Coffee, which tastes heavenly by the way. He’s apparently cast as an alien life form who is investigating the planet under the guise of his Hollywood appearance.

Companies even have Shaka‘s that are company anthems meant to create stronger bonds between its workers.

Over the years many corporate mascots have come and gone, and many of them left us with an indelible black hole in our memories as children or just udder befuddlement.

Taking the form of a Japanese businessman, mechanic, and Jack of All Trades “X-traordinare”, Sanrokumaru was the face of the Xbox 360 in Japan. His name translates literally into San = 3, Roku = 6, and Maru = 0, but his appearance casts himself as a savvy – if a little clumsy – business professional attempting to break into the Japanese market. With his two foils – one older and bespectacled, the other younger – his uncanny and literally glowing appearance makes him one of the more enigmatic characters on this list.

The Xbox 360 has always struggled in the Japanese market. Sanrokumaru represents the incredible task and hard working spirit Microsoft wanted to appear it brought to the task. He’s just like any one of us except he has an “X” for a face and can only say one word.

For some reasons Warp Zones were the most important part of Nintendo’s early advertising campaigns, but I think the idea of being “sucked” into the game became a selling point. Captain N was a cartoon that played on televisions in the mid-90’s and it was pretty much a sales pitch to young, American teenagers. In his Letterman jacket, Kevin is brought into the world of Nintendo video games to fight evil with his Nintendo Zapper as The Game Master.

Nintendo really pushed cartoons and advertising on kids in the West. I remember distinctly watching commercials for McDonalds Happy Meals that featured little Mario toys. That made you salivate and this show made you really want to be in the game just like Kevin. Good thing he didn’t have Oculus Rift.

Is Mario even Italian? I mean, Mario’s an Italian name and he has an Italian accent… but is he really, really Italian? The Super Mario Bros. Super Show pushed an American-Italian identity on the racially dubious plumber and made him as American as possible. Lou Albano and Danny Wells were fairly well known television personalities, one a WWE wrestler and the other appearing on televisions shows on almost every network imaginable.

The Mario Bros. were actually plumbers in the show, so how would kids relate to two older, middle class workers with fake moustaches? Put an awesome theme on the show and have guest stars like Magic Johnson making apperances every once in a while. The show was good fun for kids, but its intent was to  make Mario an American personality, not a Japanese company’s mascot. 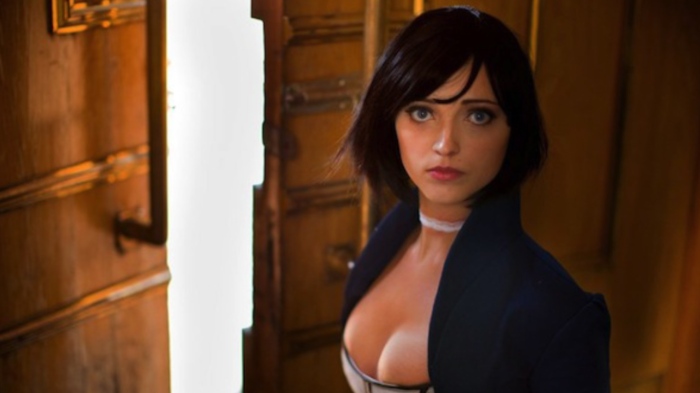 Everyone has seen this photo and that includes the advertising teams at Irrational Games. Anna Moleva, who goes by “Ormeli” on DeviantArt is a cosplayer from Moscow and is the official face of Elizabeth from Bioshock Infinite. I don’t think there’s a search you can do an image online related to the game without having this picture pop up somewhere in the results. What Ms. Moleva was able to create for Elizabeth was verisimilitude. She was able to put a face onto the character and she became the game’s unintended mascot.

If you look at Booker, the game’s protagonist, there’s nothing really going on with his design. He disappears into the background whenever Elizabeth is in the picture. When Irrational Games saw this picture they took it, they branded it, and put her likeness onto the box. It’s when something fanmade is so good the company wishes they had done it first.

Segata Sanshiro is more awesome than Santa Claus, but he’s also way more violent. The face of the Sega Saturn in the late 90’s, Segata was a bit of a take on Sanshiro Sugata, a Japanese judo master from Akira Kurosawa’s debut film. His character literally beats you into submission with his sheer graphical and processing power ensuring you remember it was the Sega Saturn that trained him to throw you so hard you explode.

Akira Kurosawa is legendary when it comes to the history of Japanese cinema. This parody is meant to create that, “Ahh that’s actually kind of clever and funny” reaction from viewers. It’s also an homage that attempts to take the director’s legendary status and says, “Hey, our console isn’t that great, but it’s pretty great.”

Whatever the fuck Nintendo Australia was doing, Nintendo Entertainment System

Nintendo’s Australian marketing team must have had some weird reports telling them what appealed to its audience. Being literally threatened by three-dimensional figures, the commercial’s slogan “You cannot defeat us” is a direct challenge to players. While they’re not mascots per se, the characters in the commercial set an odd precedent for what Australians were supposed to expect from the games.

It makes you think someone really clever made this video today and has just made everyone think it was made back then… it’s just that awesomely bad. I really don’t have much to add about this one other than the fact that being threatened might not be a great marketing tool, or maybe it’s the greatest tool of all!

Most of you probably know Polygon Man more from PlayStation All-Stars Battle Royale, but this sinister guy was the disembodied face of Sony’s marketing campaigns in North America. Again, why would a company think that being threatened is an awesome way to advertise to people? I guess you could call this shock advertising, but it still makes you wonder. I knew that bondage phase I went through in grade school was inspired by something.

The PlayStation was competing closely with Sega and Nintendo, but it wanted to stand out from the crowd. Back in the 90’s creating cute, awesome, or radical advertisements were slowly being replaced by the grunge-rock inspired cultural paradigm that just makes us think of plaid.

This cute little guy was the mascot for the PocketStation, a small handheld device that was both a memory card and a kind of PDA. It’s most popular game was Dokodemo Issho and it starred the little guy you see up there. Toro made a bit of a comeback recently in PlayStation All-Stars, but he’s been a largely forgotten PlayStation mascot in the West. While we had Crash Bandicoot, Japan had Toro. I think they got the better end of the deal.

Ah Mr. Butler, we meet again. As a parody of a Sony executive, Kevin Butler was meant to use ironic comedy to appeal to the masses… but he kind of failed that cause at E3 2010. When you take something like this a little too far you get a character rather than someone you can really relate to. Every other mascot above has a certain kind of appeal, but Mr. Butler was just an executive with a sense of humour.

I always seem to run out of steam near to the end of an article like this. Anyway, corporate identity is an important aspect of the video game industry. Having an icon or a logo is important, but having something or someone that goes beyond a font or a sound is integral to your success.

It’s why you see video game companies fronting their businesses with cute, easily Photoshopped characters and why we still see commercials attempting to bring personalities to our consoles.