Once upon a time, my family and I took a trip down to scenic Florida to visit that oh-so magical place Disneyland.

The first time we visited, I was about four years old and most of my memories consist of a strange melange of sights, tastes, and smells including, for some reason, the constant musk of cigarettes.

Anyway, one of my most vivid memories from that trip was being singled out in a crowd by a gigantic woman while on a ride.

A strange memory, you might say. Even stranger still was learning many years later that the woman who put me into the spotlight was none other than television host Ellen Degeneres.

As part of Epcot’s Universe of Energy, Ellen’s Energy Adventure was a bit of a go-to venue to visit. Ellen at the time had just starred in her own television show and was probably a pretty recognizable face to the older people to visit the ride.

The show also starred Bill Nye the Science Guy, who I actually knew having watched his show, and actress Jamie Lee Curtis who, as I discovered later in life, looks really good in spandex.

Anyway, part of Ellen’s Energy Adventure is a short pre-show. She appears on a black background and speaks to the audience about the show, about her, and about the nature of energy. During the show she at some point goes, “Hey! You in the orange hat, you’re cute!”

I was that kid in the orange hat. 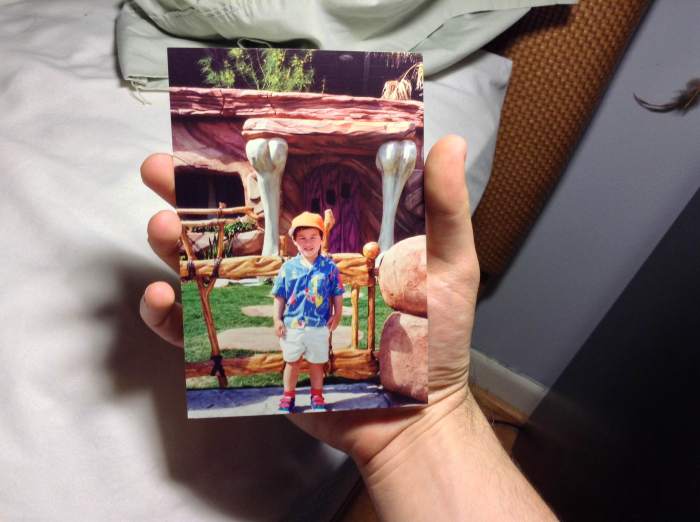 He’s so cute I could just strangle him.

For a very strange moment, this younger version of myself stopped fidgeting to pay attention to the screen. I wondered for a brief yet terrifying moment that the ride could in fact see me. I knew deep down that this wasn’t possible knowing that I was simply looking at a digitized representation of a person, but being a child incapable of that sort of thought I simply gawked and then ran over to my mom to cower in fear while feeling secretly quite special.

From that moment on, I paid close attention to almost everything inside of the ride. I remember seeing an animatronic Ellen fighting against a dinosaur, some guy named Albert Einstein completely botching Jeopardy, and hearing something about the laws of thermodynamics.

That brief connection made with this 12 foot tall woman made me interested in learning about energy. It was a moment that really grabbed my attention and I’m happy to say it also lead me to my career in physics. After graduation from the University of Waterloo in Ontario, I’m now an engineer at the Large Hadron Collider in Geneva, Switzerland.

I’m actually a journalist and editor who in high school failed about every science-related course I took.

When I look back on my childhood this is one experience that seems to stick out. At the time, I had no idea who Ellen Degeneres was, but somehow she seemed to know I was there with my little orange hat.

I’m guessing the number of kids/adults who went onto the ride with an orange hat were pretty low, so maybe I’m the only one to have this experience (save this guy on the left who probably feels pretty special right about then).

The strange thing is that I can’t find that part of the introduction in any of the videos posted online showing off the ride. I know that the ride went through a few renovations since it opened and ownership of the plaza has changed hands a few times.

Anyway, that’s about it for this post. I did want to mention that you there with the green sweatshirt are looking super cute today… did it work? Do you feel CUTE?!

Well hopefully you do.