On his way to his mission’s destination, he gets into a car accident and wakes up with little to no memory and less than ordinary surroundings waiting for him.

Immediately after seeing the trailer for the show, my brain started firing off drawing comparisons to Twin Peaks. From the unsettling setting to the characters and the atmosphere, there’s definitely something very Lynchian going on here, but the show has a much different origin story compared to the 1990’s television series.

The show was adapted from a trilogy of science fiction detective novel written by Blake Crouch. Aside from the aesthetics of the show the comparisons to Twin Peaks really stop there; however, the show gets a lot weirder when you start to look at the source material.

A brief summary: It’s now 1,500 years in the future and humans have evolved into a kind of super species that have superseded their ancestors. Wayward Pines is basically a human zoo where people have been kept in suspended animation, unfrozen, and the powers that be are trying to regrow humanity. Ethan Burke is asked to become the town’s sheriff and throughout the three books has to fight off various threats. It’s also super violent with the final book culminating in some serious action.

It’s the kind of sci-fi shenanigans that would even leave Dale Cooper at a loss.

A lot of people have commented online that the show seems like a ripoff of Twin Peaks and even Crouch had admitted to the show having some influence on him, but it’s a case of apples and oranges. They are two inherently very different series; however, what is at the core of both is a theme seen throughout television, literature, and film.

Weird Town Syndrome is a term I just made up that describes a small town that has a dark secret. Off the top of my head, I can name a few as examples: Eureka, Pleasant Ville, The Stepford Wives, Toy Story 3, The Lottery, Hot Fuzz, and Lazy Town just to name a few that play with this theme.

The idea behind it is that you enter into a perfectly idyllic town and yet there’s a dark secret that everyone seems to know. In every example listed above, the illusion of the town is broken by someone from “normal” society waltzing in and going “Hey, what’s up with that?” and then running amok until everything is either destroyed or burnt to the ground. However, what is at the centre of the protagonist’s struggle is this idea that what he or she deems to be normal is normal, and everything else is completely and utterly abnormal.

In Toy Story 3, Woody, Buzz, Jessie, and the Gang are sent to Sunnyside Daycare where they become part of a system. New toys are made to play with the younger kids who destroy them and the preferred, legacy toys get to be with the really older kids who take care of them.

This totalitarian regime is championed by the decidedly evil Lots-o-huggin’ Bear that was lost by his owner only to be replaced by another bear a long time ago. The Toy Story 3 toys meet up with a number of marginalized plastic individuals who realize how terrible the system is and they try to escape.

In doing so, Woody, Buzz, and Jessie destroy the order created by LOH-Bear and leave the daycare with quite a vacuum of toys that were kindly donated to them. Understandably, though, the system was extremely unfair, but is it evil enough to dispose of? I mean, some of the toys benefit and others suffer, but how is that any different than our own society where status decides pretty much everything?

In other words, outsiders come in from a “normal society” and attempt to correct the way others do things. In Twin Peaks, we see Dale Cooper take the exact opposite approach when dealing with the locals.

When Dale arrives in Twin Peaks, he immediately finds himself surrounded by nature and basking in the idyllic small town nature of Twin Peaks. The people are wholesome, the air is fresh, and the coffee is black, but some of the townsfolk hold a dark secret; however, it’s not exactly what you’re thinking about. Maybe you think I’m talking about Bob and the dark influence he holds over some of the show’s character, but I’m talking about The Bookhouse Boys.

The Bookhouse Boys is a secret society of men who protect the town of Twin Peaks from something evil in the woods. Being so close to the supernatural forces of the forest can be problematic; however, Twin Peaks itself isn’t evil. The people inside like Benjamin Horne can be detestable, arguably some characters like the one-armed Mike are kinda super natural, and there’s something seriously weird going on with Garland Briggs. 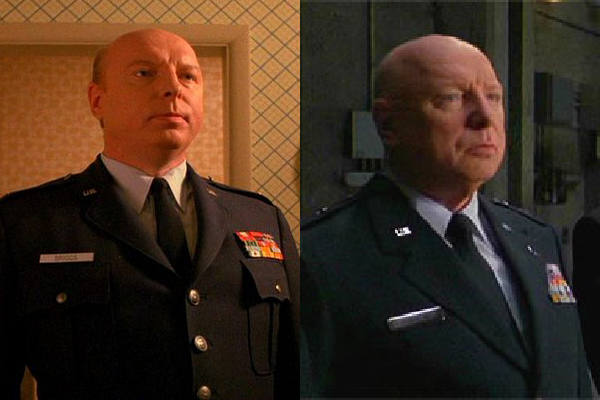 Garland Briggs and General Hammond from Stargate, coincidence? I think not!

Dale Cooper has nothing but respect for the people in the town and wouldn’t change them for the world, but Albert Rosenfield calls it the sticks and hates the place that it until the end of the series when it eventually wins him over. Twin Peaks is a weird town with a dark secret, but the protagonists of the show have no intention of changing the entire place or watching it burn to the ground simply because it’s different.

It’s a way that Twin Peaks subverts Weird Town Syndrome; however, I can’t really speak to the Wayward Series in how it will treat the theme in its science fiction world.

I think what made Twin Peaks so great was what David Lynch referred to as the show’s golden goose. Laura Palmer’s death was never supposed to have been solved and the mysterious circumstances around it enthralled audiences. Right away, Wayward Pines throws that mystery out of the window being on a pre-existing series.

Sure, maybe you won’t got online and read a plot summary like I did just a little while ago, but the information is out there and the mystery the show’s trailer tries to build has already been dispelled. In other words, mystery was the key to Twin Peaks’s success as a show and Wayward Pines won’t be the same kind of show.

Got to say though that I am a little excited to watch the show when it premieres in May this year. It was filmed in Burnaby, British Columbia and as someone who was there not too long ago it’s a nice place to shoot.

I’ll also be picking up the books soon for a review, so stay tuned!

2 thoughts on “Wayward Pines and the weird town syndrome”