Hitman is a calculating and strategic experience, and Hitman GO on mobile platforms is a strange return to form for the series.

It’s a return to form in that timing your moves correctly, figuring out the patterns of your enemies, and executing a well-planned strategy will help you find, stalk, and execute your target.

What’s different is the game’s presentation. Taking on a table-top look, the game tasks you with swiping Agent 47 through each level to accomplish different goals.

Every move you make the enemies around you take one step toward you or turn one corner giving you the chance to think, “Where should I go next to hit my mark?” It’s a strategic experience, but if it’s worthy of the Hitman name is yet to be seen. 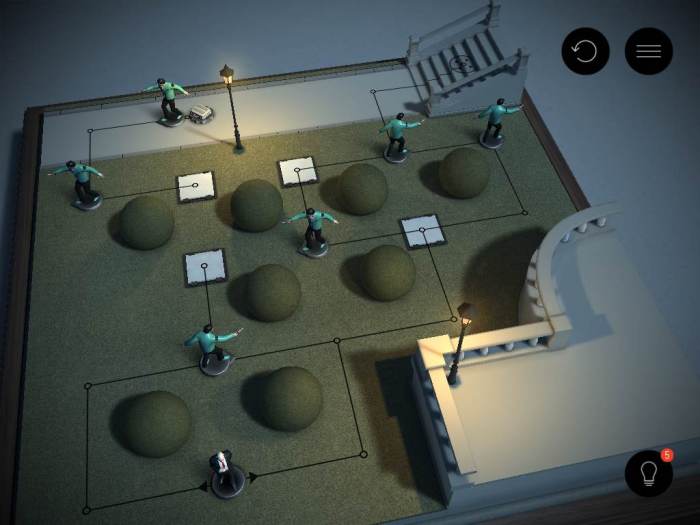 Different enemy types start to show up after a while too like these guys who turn on the spot.

It gives players a good feeling of challenge mixed with the quickness associated with mobile gaming. In other words, you won’t find yourself being paced like you are in the other games, but whether that’s a good thing or a bad thing to a fan of the series is really up to you.

While the game has the Hitman label on it, it’s certainly not of the same breed. The look of the game, the feel of the game, and the challenge of the game is entirely different than what a dire hard fan might expect and I can’t really see how the story-bereft game might get someone into the series’ narrative.

Well, maybe the game could give you a taste, but it’s paced in a way that’s so far afield the experience simply doesn’t translate to its third-person progenitor.

Though there is certainly some pretty awesome music in the game. Nothing like hearing Ave Maria while killing a cult leader.

Even though the game does an amazing job at giving you a boiled down version of the real game that’s about all it does.

After a while the game’s levels start to blend together into one big, collective heap of similar looking finger swiping puzzles and Hitman‘s strategies turn into the player just experimenting until you get the job done.

As well, with the little tokens you need to collect at the end of each level, which you need to open up other acts, swiping intensifies to a point where you’re not really thinking anymore just furiously hitting the reset button until you win.

To that end, Hitman GO offers players the ability to buy your way into new levels, which is a herald of the micro-transaction filled world we live in today, but also a testament to how tricky the game can be. In some levels you’re tasked with clearing the board in an almost incredulous amount of time.

Each new board starts out locked, but can be opened up if you get enough tokens.

With some nice revisits to the older games, some decent challenge, and some pretty ingenious designs, Hitman GO is a certainly a new and welcomed departure for the series.

However, I believe most are in agreement that while this game is different what we really want to see is a return to form for the games on consoles. The last game in the series certainly wasn’t a Contracts or a Blood Money, and that’s really what we want to see.