Samus Aran combines sensuality and femininity in one hell of a sexy package.

In the latest Nintendo Direct, Metroid fans were given a great look at her updated new design with the Zero Suit appearing even tighter and a pair of 6″ heels to help power up her kicks.

Ever since Samus Aran‘s debut in Metroid, players have demanded to see the sexier side of her character. And let’s be honest, no one really cares about her personality or her back story. As Nintendo’s hottest character it’s great to see her finally getting to show off her sensual side to fans.

Yeah…, we’re not doing this anymore and I wouldn’t even be surprised if most readers stopped right after the top three paragraphs.

Body suits have a way of messing with our heads, and Zero Suit Samus reappearance in the new Smash Bros brings up all kinds of issues with her design and character. It isn’t that the designers gave her a pair of rocket-powered heels to power her up or that they actually made her bodysuit tighter, it’s that the Samus we know has been replaced by this.

The Zero Suit made its first appearance on the GameBoy Advance in Metroid: Zero Mission as the bodysuit she wears underneath her power suit. Without any of the power, ability, or strength of her larger shell, the skin-tight suit leaves her vulnerable. There’s nothing between her and the world outside making her physically weaker than she is in the armor.

Samus Aran was once a colonist, but when her mother and father were killed she turned to a life of intergalactic bounty hunting. However, the journey of self-discovery she goes through is a long one. Inside of the armor, Samus is one of the most powerful fighters in the universe, but her power extends beyond the technology enveloping her.

Entering into the Intergalactic Police soon after her colony was destroyed, she found herself quickly rising through the ranks. Only one in a million people are able to join the police force, and Samus is the youngest person to make the cut. Ever. Samus has a kind of power few others possess, but does sexualization undercut that? 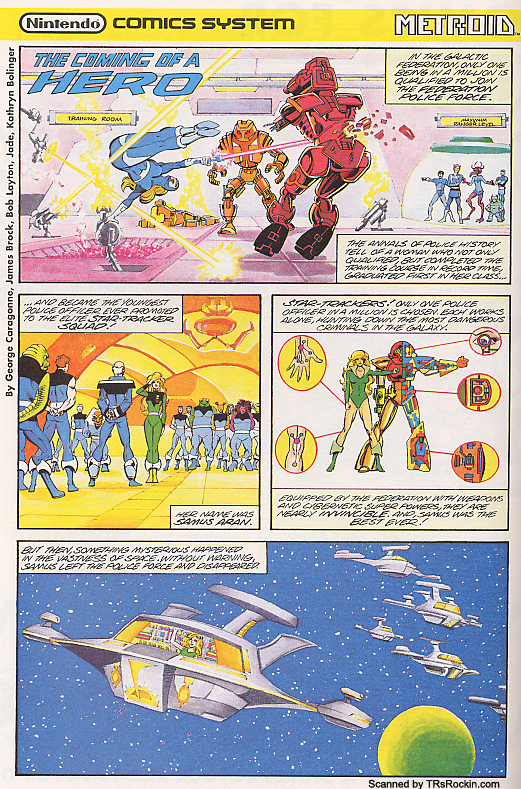 A pretty cool background follows Samus, but a lot has happened to undercut her independence as a character.

Can someone be sexually attractive and keep their authority? In video games, the two usually don’t go hand-in-hand, but there are some exceptions. Bayonetta is horribly powerful and can use her powers to destroy your face, but she’s a character that is heavily, heavily sexualized. However, does her sexualization have utility?

Some may argue that Bayonetta cannot be a sexist character as she was designed by a woman, but anyone who engages in critical thinking about characters knows this is no defense. During the game, she uses her dark powers to defeat enemies and in doing so strips away her bodysuit made of living hair. While she becomes more powerful, the loss of control takes away her defenses leaving her vulnerable to attack. The point being, her fashion has utility and its sexuality is more a function of gameplay than it is of blatant eye-catching.

When Samus has her power suit taken away, she remains a powerful individual; however, her skin-tight bodysuit plays no role improving or increasing her functionality as a bounty hunter. 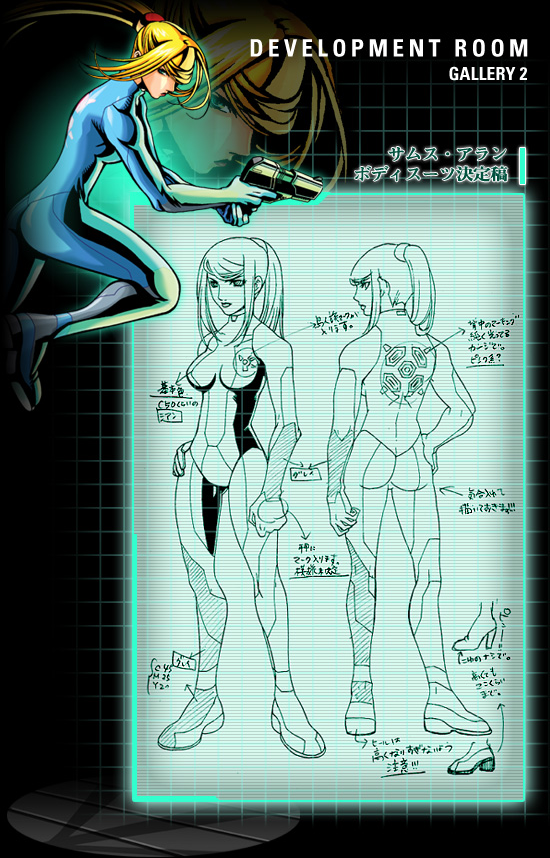 Design documents of the Zero-Suit.

Unlike Bayonetta, Samus’s Zero Suit mode, however skimpy it is, has little to no use other than giving players something to look at. This is even something the Smash Bros. team had noticed and they attempted to power her up with rocket-powered heels. Seriously? Heels?! That’s like empowering a Women’s Rights activist with a battle apron.

It becomes less a question of the Zero-Suit’s blatant sexualization and more a question of whether it’s actually viable for her – a human – to use during battle. It makes her faster, but it provides no defense, no abilities, and no real use. Bayonetta’s suit is part of her character and she uses it to form the creatures that help her defeat bosses. The Zero-Suit has Zero-Use, excuse the pun. 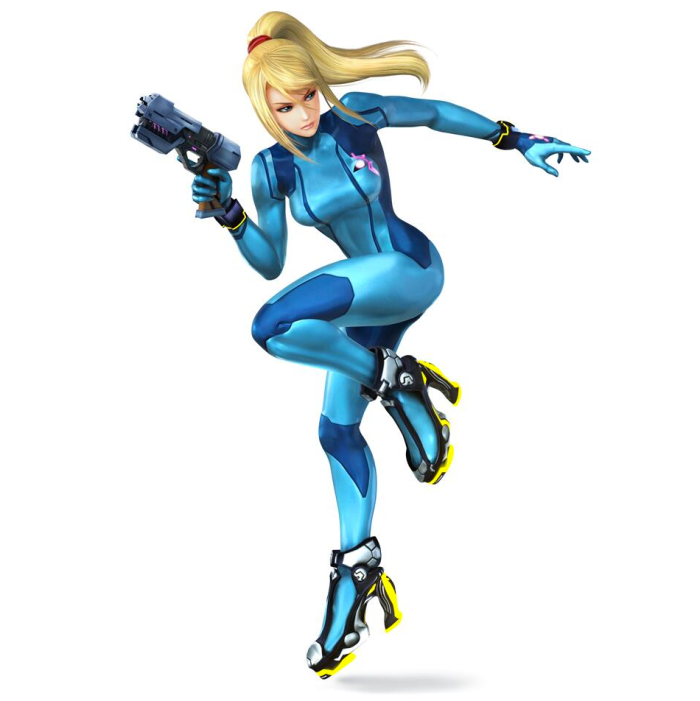 This is the Zero Suit’s new appearance in Smash Bros. on the Wii U and 3DS.

The characters of Muscle March, for example, elicit this kind of, “Oh, they’re so buff and naked LOL”. This kind of sexualization of male characters is seen throughout video games with muscle-laden individuals giving their young players insane expectations for how they should look. 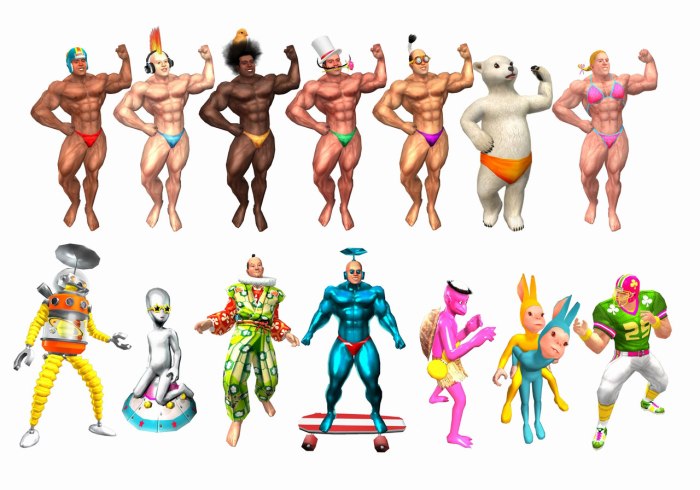 Can’t say I’ve ever wanted to look like these guys, but that alien costume is rather fetching.

The problem is that male characters get away with simple ridicule while female characters can have their entire identities changed by their sexuality. Think about Samus Aran. It’s hard to imagine her just with the power armor facade. The image we have of her now – instead of the able bounty hunter dawning a suit – is of the powered-down tightly-dressed female below.

By undressing Samus and making her look like the image below, her characters has been damaged by sexualization without a purpose. The problem for Samus is that she has no way of co-opting this sexualization either. As noted during the Nintendo Direct presentation, she’s weak and had to be powered up in order to keep up with the other characters.

Did Zelda need a pair of heels? Does Princess Peach need a beach costume? Does Nana from the Ice Climbers need a sexy, new parka? It’s only Zero-Suit Samus that required tuning up and it was in the form of a pair of heels that would change her posture and give her bigger breasts.

Imagine the uproar from players if any of the game’s characters were changed without a real purpose? 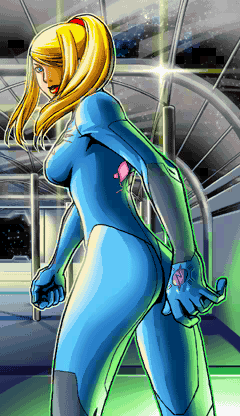 This is the first apperance of the Zero Suit in Metroid: Zero Mission on the GBA.

Whether Zero-Suit Samus is sexist remains a debate that can be contested, but fans of the series must admit that the changes to her character serve no real utility other than sexy-ing up her character.

As empowering as her character’s story can be and as powerful as Samus is on her own and within her power armor, game designers are still focused more on her looks than her actual character. It’s kind of disheartening to see her becoming more and more sexualized throughout the years.

The moment players reached the end of the first Metroid and discovered the protagonist they were controlling was female must have been a startling moment, but unfortunately soon enough our brains stop thinking about her as a female character and more of a pinup model in a space bikini. 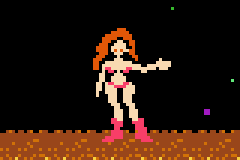 9 thoughts on “Is Zero-Suit Samus sexist?”