Who is the weirdest character in Adventure Time?

The answer is pretty obvious even if you’re only seen a few episodes of Ultra Walrus Pendleton Ward‘s epic about a boy and his dog.

Made of lemon candy, the Earl of Lemongrab is more than just a sour character. He’s practically insane. Living as far removed from society as possible and within a kingdom devoid of citizens would make anyone go a little mad, but among the many faces of the cartoon he stands out as one of the most deranged.

This article premise is acceptable!

There’s a reason for everything and the Earl’s little plot arc has revealed bit-by-bit why he’s the mad, sound sword wielding heir to the Candy Kingdom throne, and the many connections he shares with the creatures of Gothic literature.

The Candy Kingdom is a fiefdom controlled  by a monarch i.e. Princess Bubblegum, but as she’s now underage she’s no longer able to rule the kingdom properly.

The Earl of Lemongrab is the ruler of the Earldom of Lemongrab, which is pretty a forgotten corner of the Candy Kingdom and for good reason. He’s bat-shit insane. While some characters in this show can be categorized as “crazy”, Lemongrab is genuinely insane.

Put ya clothes in the air.

Created by Princess Bubblegum in one of her first attempts at creating life, Lemongrab is an experiment that went horribly wrong. Immediately after his “birth” the Earl begins to scream and howl like a new-born child forcibly removed from the womb. Not exactly the best way to start things out. It’s kind of Frankenstein-like, ain’t it?

Mary Shelley’s Gothic-horror novel is about a scientist – much like Bubblegum – that manages to create a cybernetic zombie from the parts of dead people. In the novel, Victor Frankenstein uses chemicals, apparatuses, and magic in a-still-unknown way to bring  guy back to life. Immediately after giving birth to his creation, he abandons it leaving the creature to its innocent, yet destructive, devices.

This abandonment becomes the central struggle for the two characters. It creates a kind of maternal longing in the monster who looks for the father and mother who birthed him, and so too does Lemongrab seek the attention of his creator-god Princess Bubblegum. When reunited with the Candy Kingdom, he’s rejected as being different and strange; as being monstrous and terrifying.

When Princess Bubbledumb made the Earl of Lemongrab, she did it with a purpose. If she was ever to become incapacitated, he would be the heir who would rule the kingdom. By doing this, she essentially removed him from society making Lemon-face even more alien than his initial birth portrays him to be. “Too Young” introduces us to Lemongrab’s plight, but it also sets him up for future episodes.

Who made you? Your parents did, at least I hope. If you’re the result of some kind of government cloning experiment then you have my sympathies and my support if you’re a highly-skilled clone assassin. In this episode, two important facts are learned about the Earl of Lemongrab. He sees Princess Bubblegum as god and that he was intentionally designed to be imperfect.

What Lemongrab’s insanity reinforces is that without paternal influence, i.e. Princess Bubblegum as his mother, candy people are unable to exist with their sanity in tact. Remember in that first episode when PB mentions when candy people are scared they blow up. Well, Lemongrab is constantly in a state of panic or scared out of his wits, yet he doesn’t explode. As hard as it may seem to believe, Lemongrab is an failed evolution of the species made in PB’s image, and they share many similarities.

In the episode, Lemongrab arrives in the Candy Kingdom demanding company in his estate. Without citizens, he figures that his Earldom isn’t real. PB sends a group of rowdy kids to live with him, but they aren’t suitable. The solution that eventually presents itself is creating a second Earl who can keep him company at the castle. Lemongrab 2, dressed in white garb in contrast to Lemongrab’s black, is an almost exact copy of him, but he presents an even larger problem.

What’s seen inside of the palace before this kerfuffle is important. In a number of the castle’s rooms have baseball gloves, a symbol of paternity, of loving engagement through sport. As well, a statue sits inside of the main hall of Lemongrab Castle that’s made in his image, but surrounded by uprooted lemon trees. These images suggest – through a literal reading – that he feels uprooted from his home and seeks paternal attention from his creator.

Throughout Shelley’s Frankenstein, the monster moves from home to home seeking individuals who can fill the position of his mother and father. Unable to find anyone suitable to really teach it how to be human, the monster moves on seeking out its creator. The invisible umbilical cord that exists between the monster and Victor exists even without either knowing it. In other words, both want to be connected, yet Princess Bubblegum doesn’t have this same connection.

Princess Bubblegum’s solution to the Earl’s loneliness is to create a copy essentially doubling the amount of insatiable need for love needed inside of the Earldom of Lemongrab.

The problem now is that Princess Bubblegum forgot to take her cloning formula with her. Leaving the two Lemongrabs to their devices and with the formula, they start making their own Lemonchildren. As odd as that sounds, that’s only the beginning of how surreal this episode gets for Finn and Jake as they try to save the kingdom from starvation. When they arrive, the two heroes find a castle filled with monstrosities even more derelict than the original Lemongrabs. 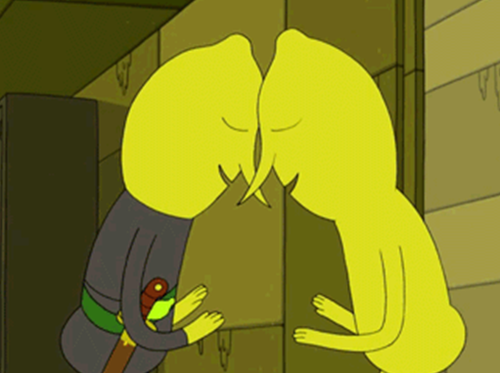 Here’s a quick look at why they decided to create new life:

At the end of the episode, it’s learned that Lemongrabs are unable to feel empathy. Lemonjohn, the giant Lemongrab who lives at the core of the castle, has his heart beaten back into action and is able to experience empathy for the first time. This realization that there is something more than the insanity that exists within the Lemonchildren comes at the hand of Finn – a father figure – who physically interacts with the child. By hitting Lemonjohn, Finn is able to awaken a part of the giant that was until this point locked away due to the heart’s isolation from the rest of the castle.

The twisting corridors of Lemoncastle then becomes a convenient location to talk about the insanity of the Earls. At then end of the episode, PB delves into their minds and tells Finn and Jake that though their minds are frazzled their hearts are fine, yet in the next episode things seemingly take a turn for the worse.

As you can see, there’s something rotten in the Earldom of Lemongrab. The ingestion of Lemongrab 2 into Lemongrab comes at the hand, again, from the tampering of Princess Bubblegum. When paired, the two Earls are able to make life, but when they attempt to raise it for themselves they are unable to.

The shattering of the little Lemon Sweets represents the broken bond that exists within the two clones. Unable to act as both mother and father for the newborn, motionless doll, they destroy it and thus destroy themselves. This, however, is not the death of Lemongrab 2.

In “Too Old”, we see the full results of the revival of the Earldom of Lemongrab and the death of the old reign.

What we see now is gender roles. Lemongrab is the father figure and Lemongrab 2 is the mother figure. One is dominant while the other is subservient to the power of the other. Not saying that these gender roles as consistent with how things are in the real world… but in Adventure Time’s Lemony world that’s just how things are. There’s a clear dynamic between the two Earls that portray them in gendered roles.

While this imbalance would see, at first, to be detrimental to the health of the Earldom, it actually brings about a change for the better. With both a father and a mother to provide “nurturing” support, Lemonhope is born.

Lemonhope is a small child living in the basement of the castle. Like Lemongrab himself, he’s isolated from the rest of the population, yet even in the dank underground cell he’s still managed to create beautiful melodies on his harp, a symbol of purity. The purity of his being, i.e. when he plays the hard, harms the corrupted Lemongrab, but when using Finn’s flute and creating a kind of discord it give the Earl joy.

When compared in their tabula-rasa sates, Lemongrab and Lemonhope represent a kind of nature vs nurture argument. While both characters are raised in isolation, the dynamics that exist between the parenting each received plays a large role in the formation of who they are. While the two Lemongrabs – being equally male/female – are unable to raise Lemon Sweets when they are presented with gender roles Lemonhope is able to thrive.

Luckily for Lemonhope, he’s able to escape, but with who? With Princess Bubblegum. The original creator of the discord thus fragments Lemongrab even more so by stealing the first example of a Lemon-birth that has resulted in something good. Lemonhope will be given an upbringing where he will be directly educated by both Princess Bubblegum and the ideology that exists inside of the Candy Kingdom. Whether or not she knew an eventual “Hope” for the Lemonpeople would come about is unknown, but the little guy is the kingdom’s best chance to find balance.

Break it down y’all

Ok, so there’s a lot of information up there and a lot of speculative writing. What we need to do is look at Lemongrab as an idea rather than as a person. Individually, the Earl is quite a character with his quirks, but as a societal identity he represents something a lot more troubling in Adventure Time.

He’s a creation of Princess Bubblegum that didn’t turn our properly. Somewhere within the intervening period of his birth and isolation, PB taught him how to walk, how to speak, and how to interact with others, but through neglect or perhaps an inability to grow he’s socially stunted. Sociopathic, psychotic, insane, the Earl is only fit to live in a society of his equally insane peers due to a programmed lack of empathy. What’s worse is that the Earl isn’t alone in his suffering any more.

Like Mary Shelley/Victor Frankenstein’s monster, Lemongrab wanders the plain of existence looking for others to emulate. The problem for him is that with the way his brain is programmed, he’s stunted and unable to change due to his mind’s permanent state. He’s trapped.

We see words like “Create Fire”, “No! No! No!”, “ON THE ROAD TO RUIN”, “Dry Run”, and “DESTROY”. This look into the mind of the Earl provides a glimpse into his discombobulated upbringing and the mess of memories, identities, and thoughts that he exists with every day. Whether these thoughts were penned by Bubblegum is unknown, but a fair amount of time and neglect are built into his mind.

His insanity is a creation of his loneliness and alienation from his mother, the princess. Through his brain, we can see the kind of influence she was able to imprint onto his mind and his nature. It is a tome of his insanity.

Holy shit, you say. Holy shit, I say. The Earl of Lemongrab’s story has yet to end, but we know just how troubled of a character he is in the series. At first presented as a monstrous scientific experiment, now we can almost see him as part of a greater experiment to create a true, new form of candy people.