Known as Satoshi in Japan, Ash is the greatest Pokémon master of all time. No questions asked, the end, goodbye (said in the voice of Mad Eye Moody).

Why, you might ask, am I defending a fictional character from an anime? Because he’s under attack by a ravenous bunch surfing the web like they own it like Gary Oak! Yeah, you know who you are you bastards.

Anyone who fails to defend Ash is officially a “Gary Oak”.

Ash needs my help and I am the only person qualified to provide him with the assistance he needs to sustain his reputation as the first Pokémon trainer to capture our hearts.

I must tell you brothers and sisters, do not be fooled by this … Red … as some call him. Powerful though he may be, he is no Ash and no Satoshi. Every one of Red’s achievements, Ash has done ten fold. So here’s a short recap of Ash Ketchum’s greatest moments.

Caught 30 Tauros in one go

Anyone who says Ash Ketchum sucks because he has never won a tournament is a liar, a thief, and quite possibly a larcenist. Back in the heyday of Ash’s first journey through Kanto, he made a stop at the Safari Zone to capture some Pokémon. Let’s just say it couldn’t have gone better… except for that mishap with some firearms and being herded out of the conservation zone.

But that’s not what we’re here to talk about! No, we’re here to talk about the 30 Tauros Ash caught in one go. When journeying through the Safari Zone, he happened upon a stampeding herd of the Normal-type Pokémon. After a great bout of strategic thinking, he pretended to trip and fall resulting in a whole net-full of Pokéballs falling into the midst of the stampede. It was a coup for him and for Professor Oak who took on the entire herd at his lab. Look at that. See how cute that is!

Did Red ever catch 30 of the same Pokémon? I think not! During the Winner’s Cup in the Orange Islands one of Ash’s Tauros lead him to his first, big victory! Do you think the insanity stops there? No, it’s just begun! During the Pokémon Swap Meet, Ash uses a Tauros to win yet another competition sending his opponent’s bison flying through the air! In another tournament, Tauros literally sends a Metagross into the air just with its horns! A Metagross! Those things weigh over 1200 pounds! Are you reading this?!

Ash Ketchum has an entire herd of Pokémon that he could send to your house to trample your things and on one occasion they do just that creating a hole in Professor Oak’s lab. That’s right. While Red is strolling along in the Safari Zone cherry picking one Pokémon at a time, Ash is taking names and entire herds and putting them in conservations, not somewhere trainers can just displace them one-by-one.

Sacrifices everything to benefit his friends

“But Ash Ketchum is such a loser,” you say citing his many companions who travel with him and choose to leave. Sure, he might be a little down on his luck, but he’s only like that because he sacrifices everything for his friends. Misty, Brock, Tracey, May, Max, Dawn, Iris, Cilan, Todd, Ritchie, Barry, Lyra, Luke, and Stephan have only benefited from travelling with him.

Think about it, Ash is the protagonist. Before any of Ash’s friends met him, they were likely content to either sit in gyms or languish in uselessness.

Ash saves lives by taking people out of their every day routine and right to the very edge of sanity. Let me explain the “Ash Ketchum Phenomenon”. Every time someone leaves Ash’s company, they get better. Misty, for example, leaves Ash’s party and returns a total badass. When travelling with Max, May, and Brock, Misty returns to help defend a Togepi Paradise that was being threatened. As well, she remains the Gym Leader of Cerulean City Gym and became the Champion of Tour de Alto Mare. This leveling up after leaving the party happens with almost every character who travels with Ash.

This might lead you to believe that Ash holds people back, but you’re wrong. So wrong, and you’re also a mean person. Ash inspires people to travel. Without Ash, Brock and Misty would still be living their boring lives and not traveling the world. Think of what it would be like to live with someone like him. Everyday is a new adventure! Every adventure changes the world! The world becomes your Cloyster! And every companion gets the benefit of improving themselves after the leave. Ash never wins in this formula. He provides. He sacrifices. He’s a hero.

Do you know who THE toughest Pokémon trainers are? No, don’t think about the Elite Four or any of the criminal syndicate leaders who exist in the world. It’s the Frontier Brains.

For those who don’t know, Frontier Brains are some of the most diverse trainers around. They’re tough because unlike most Gym Leaders who stick to one type, Brains use all different types and different parties to defeat their opponents. They use different conditions and a whole host of other challenging factors to make things… difficult. Guess who almost became one? Ash Ketchum.

He could have used any of his friends here to do it too.

In a battle against Brandon – one of the Frontier Brains – Ash manages to come out on top using only a Bulbasaur, Squirtle, and Pikachu. That’s like going to a knife fight with a DVD of Carl Sagan’s Cosmos: A Personal Voyage and a shopping cart. It doesn’t make any sense.

If we go by the video game’s logic even at the highest level those three Pokémon wouldn’t even come close to the stats of Dusclops, Solrock, and a Regice. The only conclusion is that Ash is a Pokémon master.

After the battle is over and Brandon picks his jaw up from the floor, he offers Ash a position as a Frontier Brain. Ash is probably 13-years-old at the time and he says, “No”. Ash would rather travel the world than becoming the youngest Frontier Brain in the history of the world. That’s like Harry Potter outright refusing to go to Hogwarts only to stay at the Dursley’s inside of that little cupboard. Speaking of people who save fictional worlds from disaster.

Pokémon: The First Movie is the best example of how Ash Ketchum has saved the world without the need for a reward and accolades. At the end of the film after Mewtwo’s anger has been quelled, the Psychic-type Pokémon seals away the memories of the events that took place in the film.

In other words, everything that Ash did to save the world is forgotten like a Slowbro buffing its Special Defense.  What Ash has in spades – aside from a heavy coating of hero armour – is pure gusto and the ability to think outside of the game’s constraints.

Ash runs at Mewtwo and attempts to punch him! Seriously! Like a raging Hitmonchan, he turns his hat around and charges at an omnipotent being!  That’s like meeting God and immediately uppercutting him with the force of a thousand Machops. And after he gets knocked down, he gets back up to try again! This is the kind of daringly stupid actions that make Ash a true hero. 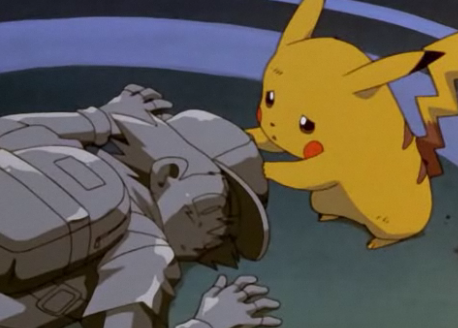 He doesn’t need a statue, he is a statue.

After making my 9-year-old self cry inside of the theatre, Ash unites the world of Pokémon through their common love of freedom. Instead of making it his life’s goal to capture Mewtwo, he helps set the genetically created creature free by showing him true love and the meaningfulness of companionship.

Need I go into details about all of the other films where he saved the world? I’m not going to because my wrists are getting a little tired from typing, but believe me Ash is pretty amazing.

Ash is destined to rule the world of Pokémon

Red spent one year traveling the world of Pokémon. He captures one of the first 150 including Mewtwo, one of the most powerful Pokémon in existence. Essentially, he displaces 150 creatures from the world to live out their existence at Professor Oak’s laboratory.

Red is a walking ecological disaster who has too much power to wield and not enough experience to control it all with. Ash Ketchum, on the other hand, is the Pokémon world’s most likely candidate for future president.

Ash is looking at the big picture when it comes to his adventure. Throughout the 17 seasons the show has been playing, he’s put out fire after fire by throwing himself right into the middle of conflicts. Give Ash 10 years and he’d be the most recognized Pokémon trainer in existence and guaranteed to move right to the top of any organization. What people assume about the Pokémon world is that being a master is the end-all-be-all, but what if it isn’t?

Someone has to control all of this.

In a year, he’s traveled the world catching Pokémon. In a year, Ash forged relationships, he resolved conflicts, he made enemies, he found legendary Pokémon, he advanced Pokémon science and nutrition, and he’s taken more jolts of electricity than any known human being in existence.

Ash Ketchum is never going to be a Pokémon master because he doesn’t need a silly title to be awesome. He just has to be himself and he’ll be all right. While he doesn’t have a long list of achievements, Ash has left a mark on the world that people will remember.

Ash. Ketchum. Many of you might consider Red to be the better trainer. If you compare each trainers’ first years side-by-side you’ll see that even if Ash has done ‘Less’, overall he’s accomplished a lot more.

This probably has to do with having 17 seasons to play around with, but heck he’s saved the world more times than Team Rocket has blasted away.

He’s the Pokémon Master we all want to be.

25 thoughts on “A critical defense of Ash Ketchum, the greatest champion there ever was”